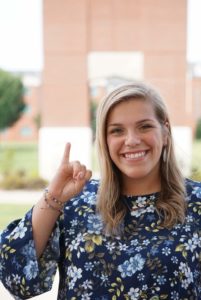 Sunday, October 6, 2019: On Oct. 6, Iota Kappa Phi played the Freshman Women in their third game of the flag football season. Jackson played tackle and linebacker for Iota. In the first half, Jackson popped off the line and caught the ball in the middle of the field at the 30-yard-line and ran it in for a touchdown. She also recorded several flag pulls on defense.

Q: Why did you want to play flag football intramurals?

A: “I wanted to play flag football because I love playing sports and being competitive. It is also even better when you get to play with friends. I also broke my foot playing powder puff in high school, so this was a good way to redeem myself.”

Q: What is your favorite memory from playing intramurals?

A: “My favorite memory is from our recent game when I thought I was in the end zone and celebrated my touchdown five yards early before realizing I was indeed not in the end-zone. I soon realized my mistake and crossed over into the actual end zone for a touchdown. It was hilarious.” 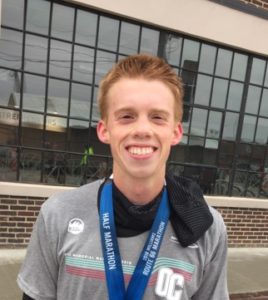 Q: Why do you enjoy running?

A: “Running has been a part of my life since I was ten. I enjoy it because it is my go to when I’m stressed, but also my way of staying in the best shape possible.”

A: “I’ve always enjoyed sports and playing intramurals allows me to come together with my Kappa brothers and achieve our goals. I also like that I can compete at many different sports throughout the year.”