A trip of a lifetime: My experience at NBA All-Star weekend

Three months ago I received the most unexpected email of my life.

I had won the NBA Primetime Picks challenge, according to the email, and was entitled to an all-expenses paid trip for two to the 2020 NBA All-Star game in Chicago. All I had to do was fill out some paperwork, and they would book my flight and hotel.

True to my journalist instincts, I was skeptical. Was this all a ploy to get my credit card information or Social Security number? I recalled entering some kind of NBA-sponsored competition during the 2019 playoffs, but I had no idea that I won. Maybe my contact information from entering the competition had trickled down to scammers.

When I called the number listed in the email, a representative from a promotions company in Connecticut picked up. The prize was legit, she assured me. My skepticism quickly turned to joy—the odds of winning a prize of this magnitude are astronomically low, and I struck gold.

My brother and I had an incredible time in Chicago this past weekend. In addition to attending the All-Star Weekend festivities, we checked out the famous Cloud Gate and ate loads of deep dish pizza. We also enjoyed breathtaking views on the 95th floor of the 875 North Michigan tower, known formerly as the John Hancock Building.

But make no mistake, All-Star Saturday Night and Sunday’s All-Star Game were the highlights of this once-in-a-lifetime trip.

NBA All-Star weekend has an almost mystical allure. The best basketball players in the world, as well as some of the top musicians and celebrities, all gather together in one city for one weekend to celebrate the game. For a few days, rivalries and grudges are set aside, and the world has an opportunity to see just how talented these athletes are.

There is perhaps no greater showcase of skill in sports than All-Star Saturday Night, which includes a skills challenge, three-point shootout and dunk contest.

I have been an avid fan of All-Star Saturday Night for over a decade. My love for the slam dunk and three-point competitions started at age eight, when I would fire up my brother’s GameCube and simulate the contests on NBA Live 2005. I spent hours trying to perfect the difficult, but beautiful, 360 between-the-legs dunk.

My childlike glee returned as I strolled towards the United Center, decked out with massive posters of the NBA All-Stars, for the first time on Saturday night. I was no longer a 22-year-old college student balancing homework and classes with trying to find a post-graduation job. I was an 8-year-old with a pure, simple love of the game.

My brother and I went through security and entered an atrium area of the United Center. In the center of this space was the NBA on TNT set, where Charles Barkley, Shaquille O’Neal, Kenny Smith and Ernie Johnson were providing commentary. A statue of Michael Jordan stood behind them.

Starstruck, I stopped and gazed for a while before entering the arena.

We had upper deck seats on both nights, but the view in-person was still something to behold. The people behind us complained about being up too high. I was just happy to be there.

With the crowd probably two-thirds full, the Skills Challenge began promptly at 7 p.m. Oklahoma City Thunder guard Shai Gilgeous Alexander was part of this event, and I was looking forward to cheering him on to victory. Unfortunately, he had trouble with the passing part of the challenge and was knocked out in the first round. Showcasing his impressive speed and shooting, first-time All-Star Bam Adebayo of the Heat took home the Skills trophy.

The hype and anticipation grew from there. Before a now capacity crowd, the three-point contest started around 8 p.m. The NBA decided to switch up the challenge this year, with a green “Mountain Dew” ball worth three points located several feet beyond the arc.

Former University of Oklahoma star Buddy Hield, now with the Kings, battled it out with Suns guard Devin Booker in the final round. Booker went first and set the bar high with a score of 26. Hield followed up and started off slow, but drained seven of his eight final shots at the end to finish with a score of 27. The crowd erupted after he drained his last shot and clinched the victory.

The dunk contest also went down to the wire. Heat forward Derrick Jones Jr. and Magic forward Aaron Gordon set the bar high in the initial rounds, dunking it between the legs and jumping over celebrities and their teammates. The two were forced into two tiebreakers as they continued to impress the judges.

No dunk drew as much awe and applause as Gordon’s final attempt. In the second tiebreaker round, Gordon was forced to improvise and deviate from his first three dunks, which were planned. He scanned the crowd for the tallest player in attendance. It was 7-foot-5 Tacko Fall of the Celtics, the tallest player in the NBA and one of the top 50 tallest humans in the world.

Gordon seemed to clear him from my vantage point, and the crowd erupted. Video replay showed Tacko had to duck and Gordon didn’t quite make it over. Impressive nonetheless. Tacko is four inches taller than Shaq.

The judges were seemingly not as impressed as the crowd. Gordon received a 47, short of Jones’ previous score of 48. On his 23rd birthday, Jones narrowly took the crown of slam dunk champion. A majority of the crowd was outraged. 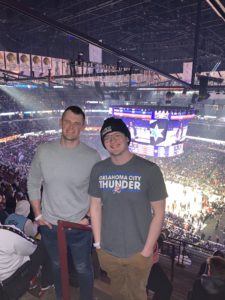 This spirit of competition continued on Sunday night. For the first time ever, the Elam Ending format was utilized. If you did not get a chance to watch the game, you can read about the new format here.

The new format made for an incredibly exciting ending. There was sure to be a game-winner—no messing around at the end of the game as most NBA fans were used to. The teams turned up the intensity at the end, fouling and playing tough defense and arguing with the referees. It felt like a playoff game with the best players in the world.

After trailing by 17 points in the third quarter, Team LeBron rallied and secured the narrow 157-155 victory over Team Giannis. Thunder guard Chris Paul played a pivotal role in the game, knocking down seven three-pointers and setting up his teammates for easy buckets. The 34-year-old even caught a lob from Russell Westbrook and dunked it home. I, of course, was cheering him on loudly from high in the rafters.

With 30 points and 7 rebounds, Kawhi Leonard won the All-Star game MVP award. He looked like a man amongst boys, hitting deep shots and picking off passing lanes with ease. Leonard, the 2019 Finals MVP, always seems to turn it up for big games.

As I sit 35,000 feet in the air, typing this article up on my flight home to Oklahoma City, my experience still feels unreal. The odds of winning a contest of this magnitude are incredibly slim. I am so grateful I got to experience this once-in-a-lifetime opportunity with my older brother. This was an experience I will always remember and cherish.

More from CultureMore posts in Culture »